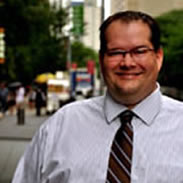 A native of Springfield, Mo., Matt earned his Bachelor of Journalism degree from the University of Missouri in Columbia. Matt began his broadcasting career the day following his high school graduation with an internship at KTXR-FM. By the end of the summer, Matt joined the station full-time as both an on-air announcer and sales assistant. Following stints as a reporter for KBIA-FM and KOMU-TV in Columbia, Matt served as section coordinator for Sun Publications in Overland Park, Kan., specializing in real estate special sections for the newspaper company.

Matt launched his public relations career with the Home Builders Association of Greater Kansas City and quickly rose the role of Senior Vice President of Communications. At the HBA, Matt oversaw membership communications for one of the nation’s largest home-building associations while also providing public relations for one of the nation’s top ten home shows and the second-largest housing tour in America.

Today, Matt is a strategist for Smirk New Media, a fast-growing social media and public relations firm in the Midwest. Matt is an avid sports fan, particularly of Kansas City sports and the Missouri Tigers. He resides near Liberty, Mo., with his wife Nancy.